So we finally go

t through plan check from the city (huge relief since our Falcon project in Mission Hills got stuck in the bureaucratic spin cycle because of a little plant called Artemisia californica or better known as coastal sage brush which I will now just refer to as an expensive weed. This expensive weed was found on the cities property next to ours on the hillside and because no one at the city could seem to agree on how to move forward.

The options they were giving us were not acceptable especially since we were not even touching anything within a 100 feet of this little frigging plant. The only exterior work we were doing on the back of the property (where the hillside is) is some work on the decks which are already existing.

This has definitely been an interesting project and quite the learning process. On every project you learn something and some times those lessons cost more than others.

I am not sure what I could have done different on this project. We were able to get a great deal on this buying it at $305,000 when the average price in the area is above $700,000, but that price came with strings attached.

Here are some things that we have come up against.

As some of you may or may not remember the reason this property was so cheap is the city put a lien against the property due to code violations.

The previous owner started a big remodel including

But like many back yard weekend warriors you could tell some of the work was questionable at best. 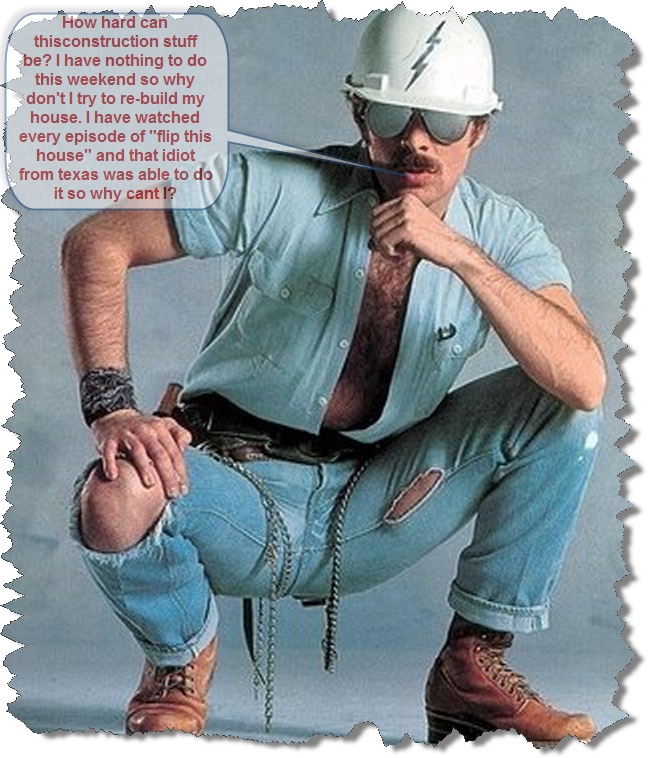 Hey it’s so easy to flip real estate even a cave man can do it.

To make sure we knew what we were getting into (or at least have a decent idea of what we were looking at) we met the inspector at the property (multiple times) who put the violations on Falcon.

The inspector seemed very helpful and walked myself , contractor, architect (different times) through the property  and pointed out what he wanted fixed. Some of these items were…

Well even though it wasn’t April, the joke was on me. The first thing the city did when we submitted (as per the cities guidelines) our plans from the architect was to ask for additional items (it seemed like every time we submitted someone asked us to add something else. I think there was a contest at the city to see who could get us to make the most changes and different times).

What made this difficult is every time they asked for something new we had to scramble for someone to get it done as a priority. Below are some of the items that were asked of us, piece meal (It would have made more sense to me to have just given me the list from the start. But what do I know they need to stay busy to justify those big pensions right)

Here is a brief rundown of where we are at and what happened.